Tanjung Puting Trip 2016: Get Close with Nature and the Precious Orangutan 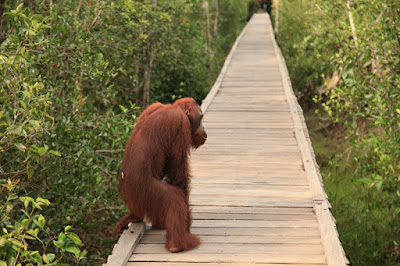 His name is Percy. I don’t know how he got his name, but he seems to be famous among the tour guides. I’m talking about the orangutan you will find walking around Camp Leaky and being very close with the visitors. Sometimes when he spotted an opportunity, he will jump into the tourist boats to steal food like snack, biscuits and sugar. I was initially surprised by his act, but it didn’t seem to surprise all the tour guides and boat operators. Here, in Tanjung Puting National Park, you can get really close with the precious endangered orangutan.

Tanjung Puting National Park is a national park in Indonesia, located in Central Kalimantan (Central Borneo). The 416,040 hectares park is famous for its orangutan conservation, it was one of the biggest orangutan conservations in the world. Orangutan population is estimated around 230,000 in total. In Borneo alone is estimated around 45,000 – 69,000 (endangered) and in Sumatera about 7,500 (critically endangered). The nearest main town to get to Tanjung Puting National Park (TPNP) is Pangkalan Bun. There is a direct flight from Jakarta to Pangkalan Bun.

Although the orangutans are really cute, and also precious because of their endangered status, they are not the main reason for my visit to TPNP. I’m not such a big fan of animal or animal lover, i’m more attracted to what nature has to offer. The park is composed of dryland dipterocarp forest, nipah palm trees and mangrove. Imagine cruising the river in the quite surrounding, nothing separates you with the nature, there’s only you and the clear sky above. The trees around you give off clear oxigen, and in the night you can see a star-studded sky. It was a good detoxication for someone who live her daily life in Jakarta like me. And it was not so exagerating that Dr. Galdikas, one of the world’s leading expert on orangutan behaviour and founder of Orangutan Foundation International called this place “Garden of Eden.” 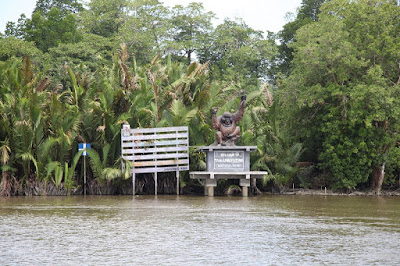 So, after carefully reviewing offers from tour operator, we chose the 2 days/1 night package because it can be done just over the weekend, so you don’t have to take a leave. As far as I know, visit to TPNP has to be guided, and we have to take one of the klotok boats to cruise along the national park. It’s all been arranged by the tour operator.

We took Trigana Air on Saturday morning, which fly directly to Pangkalan Bun. We are being picked up by our guide Pak Nasir at the airport. The flight was delayed, so by the time we got there, day already approaching noon. We took the local taxi from airport to Kumai Port. You probably heard Kumai port before, it was famous when media crews flocking here for the searching of Air Asia debris nearby. Kumai port is also a gateway to Borneo’s gold mines and timber forest. The small town is also known for its bird-nest business, no wonder you can find on your way here the odd-shaped swiftlet house (rumah Walet).

We arrived at Kumai port around 12.00. I saw our boat crew is cleaning the boat and the bed, just like the hotel staff prepare the room. This will be our five star hotel for tonight.

When the boat took off, we have a wonderful lunch on the boat. Fresh water fish, vegetables, and Indonesian style sambal ! Promise you you will not be lacking anything living in a boat. We are served by four crews, they are the boatmen (driver and navigator), a cook, and a guide. The boat is equipped with simple mattress, pillow, mosquito net, clean water, kitchen, and toilet. Has to admit that i’m not used to this kind of trip where everything was already arranged and we are being served like kings.

On the first day we visit Tanjung Harapan. There are three places here where you can see the orangutans upclose, ie Camp Leakey, Pondok Tanggui, and Tanjung Harapan. The orangutans feeding time is 9 in the morning and 3 in the afternoon. Here is where the forest rangers bring food (banana and milk, sometimes corn) to the feeding table that was set in the jungle (so it’s not far from orangutans real habitat). With time the orangutans were conditioned to come every 9 am and 3 pm to the feeding table for the food. This then become one of tourist attractions where the tourist prepare their best lenses to capture the orangutans expressions upclose. (Too bad I don’t have tele lense)

I enjoyed more the trekking. To get to the feeding table, there’s usually 30-45 minutes walk in the forest. Those are the best, where I can breath fresh air and take pictures of forest lives. Besides the walk, we spend most of our time in the boat, cruising the river, talking and taking pictures. 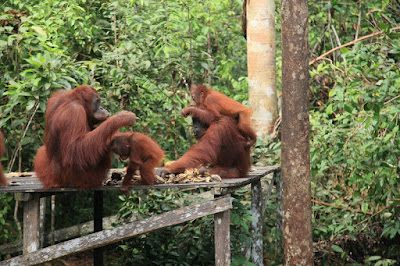 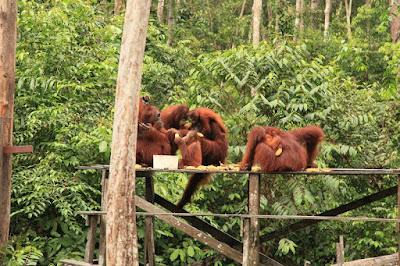 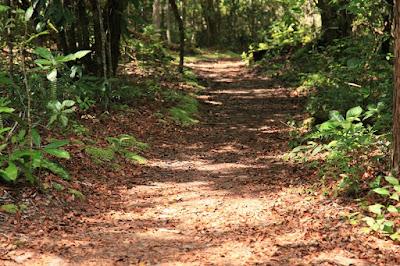 When the night came we had a lavish dinner with candlelight. Why so romantic? It turned out the candle was necessary because if we use lamp (with generator) it will attract swarm of moths.
After dinner we just enjoy the quite night. Our boat parked in the calm river, tied to a tree. In the heart of Borneo jungle, night was not as quiet as I expected. The chatter of the boat crews was the most annoying, but it stopped when they slept. Then we can hear the soft soothing voices of birds far far away, as well as the sound from the crickets.

When we tried to sleep there’s another noise. It’s like people are playing with water. The sound was not constant so it’s hard to sleep with it. We were curious and we decided to find out what noise was that. We took our flashlight and look below to the water. We saw thousands of small fishes moving around themselves randomly as if they were dancing in the water. So, that apparently who’s to blame for the noise. We can only surrender.

I managed to sleep well that night. Early in the morning dew was dripping above us from the boat hut, no wonder our clothes that we tried to dry in the sun, become wet because of the dew. Well, that was just part of living in a boat.

And just like staying in five star hotels, the best part was the breakfast. We had fresh coffee, pancakes, egg and fruits. In the lovely morning when sun start to shine, the sunlights appears from the shades of tree. Being well fed in the morning, we are then ready for another day of cruising the river, taking pictures, trekking, and orangutans watching.

I’m quite happy with this trip. Being close to watch orangutans, i can see that their pattern of movement is similar to what being pictured in the popular movies such as Tarzan and Jungle Book (although what being pictured is not specifically orangutans). I also learned that the older male orangutans have civet in their faces, and how cute it was that the baby orangutans are always clinging to their mothers.

Beside orangutans, we can also encounter proboscis monkey, gibbons, wild boar, some birds and the crocodile! For the vegetation, it would be an additional bonus to the nice walk in the jungle if we know the species. Luckily there are some of the more popular species such as orchid, nepenthes (kantong semar) and Indonesian well known medicine pasak bumi.

But now, such a scenery was rare due to the heavy deforestation. Not so far from the national park lies the vast palm oil plantations. I don’t know whether the millions of fireflies as described is still possible in the present days, but I do hope that you’re lucky enough to encounter that in the real life, not only in your imagination.
Posted by mei at 9/15/2016 05:43:00 PM
Email ThisBlogThis!Share to TwitterShare to FacebookShare to Pinterest
Labels: Tanjung Puting