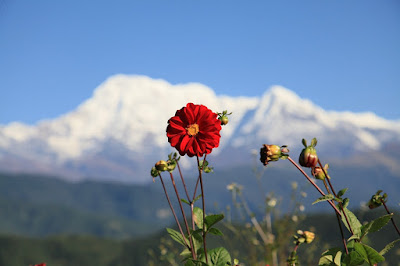 On a sunny October day we drove from Nagarkot to Pokhara, which took us around 7 hours totally. We passed Kathmandu on our way, and made one fortunate stop at Kathmandu Tribhuvan airport to get my lost luggage. The drive on bus was enjoyable, with our group of 19 fun people from Indonesia, which continously joking and cheering along the way. We requested our guide to play us some Nepali music, I enjoyed so much watching the view of Nepal countryside along the way with Nepali folk songs as a background. The road was quite bumpy in some places, and seating in the back of the bus actually would shake the whole of your body, but that's fine for me. I still managed to take pictures, although not very good, of people and lives we saw from our tourist bus window.


When we arrived in Pokhara it was dark. We stopped at one place where we have to continue our journey walking because our bus won't fit the small alley. It was around 7 PM and it was raining softly, there were so minimum lighting around, so we don't get a clear picture of what's on our surrounding. All we know is we have to walk around 30 minutes to get to the hotel. For local people it probably only take around 10 minutes. But for us, the walk was not easy. The evening was dark, no light, the mountainous air was chilly, the rain makes the earth wet and we have to be careful not to step on pool of water. Everything make the ascending trek to the hotel seemed like endless.

The hotel name was Himalayan Deurali Resort. We arrived in a dining hall (which was in seperated building with the rooms) with very minimum lighting. It's time for dinner so we feast ourselves with another Dal Bhat dishes. The light went out, then it came again. For several times. We had like this also in Nagarkot. Electricity is a luxury, especially in the mountain area. We ate quietly, and then go to the rooms. Some of us are still lamenting about the difficult walk we just had, but the hotel owner told one of our friends that tomorrow you will forget about all the difficulties. 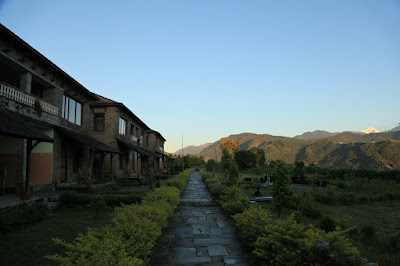 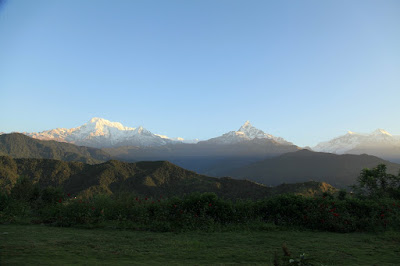 When we woke up in the morning and opened the window, it was like "Wow" and no other words can describe that feeling. The white-topped mountains was right in front of us. It was the Anapurna range of Himalaya. The hotel owner was right. Today, we forgot all the difficulties of walking, of transporting our luggage, and of the lack of electricity. The view was just amazing, and it stays right in front of us. We directly run outside our room, and went to a field for better view. We wait for sunrise, the sun coming from the east carefully glisten the peaks of Annapurna. One by one, the east-facing peak glistened like gold, and it only happen for a short time before the day is getting brighter.

We had breakfast in the outdoor. Under the morning sun and the beauty of the Annapurna range, it was one of the best breakfast in my life. 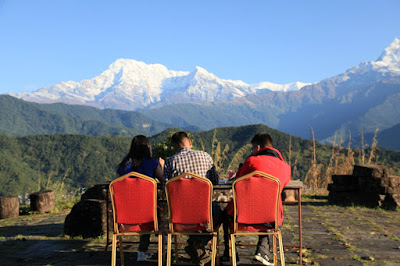 From the mountainous Himalayan Deurali Resort we descend to the lake area of Pokhara. Here we are at the heart of Pokhara tourist area. Near the Fewa lake, there were many stores, restaurants, and souvenir shops. After boating in the Fewa lake, we had our lunch in Gurkha restaurant nearby. After lunch we have time for strolling and shopping around the area. It was a nice stroll along beautiful shops. Here it was a lot calmer, quieter, and cleaner than Kathmandu, although the capital has it's own unique charm.

Pokhara has everything to constitute a beautiful place. It has mountains and hills, and it has lake. Pokhara is the second largest city of Nepal and is a popular tourist destination. Located around 200 km west of the capital Kathmandu, Pokhara is the starting point for most of the treks in the Annapurna area. Three out of ten highest mountains in the world---Dhaulagiri, Annapurna I and Manaslu---are within approximately 15-35 miles of Pokhara valley.

Besides boating in Fewa Lake which was one of the most popular activities by tourist, we also visit World Peace Stupa, Devil's Falls, and Sarangkot (for Paragliding).

On the second night in Pokhara we stayed at Hotel Crystal Palace, near the lake. It was considered the best hotel so far in our trip, merely because the electricity never fail, the hot water are abundant, and wifi is fast. A very mundane reason. 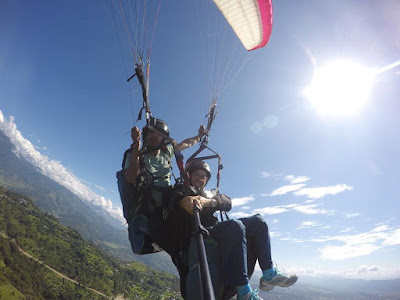 Once in your life, if you want to know how it feels to fly and soar above the sky, you should try paragliding. One of the best place to do this once in a lifetime, is in Pokhara. In the Sarangkot hill, it has the best take off place, so there won't be any problem for a beginner, like me. It was my first time doing paragliding, and I did it in Pokhara. The view of Himalaya range above and Fewa lake below is just the temptation you can not resist. Although you have to fight the fear and the nervousness that creeping inside you before you take off and soar. We paid 81 US$ including photo and video, for about 30 minutes in the sky, it's gonna be an experience you'll not regret.